So, at this point we've replaced:
When I last picked it up the tech had been unable to get the battery to go above 86F. That's while it's in the 60's outside. They put it on their L2 charger and called me to come get it. They felt confident it was solved after the chiller block replacement.

By the time I got there it had finished charging and was at 100F - it would have kicked on the chiller at 97F. I took the freeway route home, putting about 25 miles on it and had it at 108F when it was plugged into my L2. Again, while it's in the 60s for ambient temp.

A half hour later, it had climbed to 113F and stayed there while charging for about 2 hours. After that 2 hours it ran the chiller alone for another hour, during which the temp dropped to 111F and I unplugged it so it could ACTUALLY cool off and stop wasting electricity.

So, at this point I need to charge on L1 anytime my battery is anywhere near the chiller trigger temp, or it will start running the chiller and somehow adding thermal energy instead of taking it away.

I have a feeling I'm going to need to pull the battery or otherwise test the coolant flow through different parts of the system to see if something has gummed up.

Anyone have recommendations for in-line flow meters? Is it possible to even "get to" the coolant channels on the pack if I go through the effort of pulling it out?
2012 Candy Blue FFE
33.5kWh battery pack
CHAdeMO DC Fast Charging

Sounds like you may have a dead pump or clogged coolant filter. the battery cooling passages are practically foil thin metal plates sandwiched between the cells in the pack. taking apart the pack would accomplish nothing.

The battery loop also goes thru the charger. there are any number of hoses you could undo to very coolant flow but that would make one hell of a mess.
2014 Blue Candy FFE
http://www.fuelly.com/car/ford/focus/2014/triangles/303811 (since this forum doesn't allow BBcode in sigs)

So just off the top of my head, has a vacuum air purge/coolant refill been performed? A large air gap in the coolant line might prevent sufficient coolant flow to cool the battery.

Also, I noticed that in my FFE, the solenoid for controlling the valve for the chlller refrigerant gets substantially hot. Stupidly hot. Might that solenoid have burned out? Is it hot or cold when the battery is to be cooled? This is the black "cube" under the coolant bottle.

So when the thermal management is supposed to be cooling the battery:
Are the pumps running? Check requested speed and measured/actual speed.
Are the valves in the correct positions? Check requested position and measured/actual position.
Is the A/C compressor running? Check compressor speed.
Is there sufficient coolant in the loop? Listen for the coolant pumps to go from a whine sound to a high speed rattle sound and then back to a whine sound. An air gap in the pump makes the rattle sound.
Is the temperature really hot enough to justify the cooling mode? Check the coolant into battery temperature vs the coolant out of battery temperature. If there is a large delta, the thermal management system is probably working. If the two temperatures are similar but low, like ambient, or if the temperatures are similar but high, like around 105, then the thermal management system is probably not working. Either not necessary (too low) or something wrong (too high)

You can check these parameters with forscan.
Good Luck!

The second filter replacement was one of the most recent things done. The solenoid has been checked this time and the previous. No indications of cavitation. Compressor turns on fine. The chiller and line are cold. Valves and diverters signaling as expected. No large delta, just "high". When it gets warm out for real, the car will stop giving me AC in the cabin because it's trying fruitlessly to get the battery temp under control. In the dead of winter I was actually able to get the battery hot enough to throw a "stop now" warning. The pump is running and the coolant has been totally drained and refilled by the dealer at least twice.

I figured, if I can hook into each end of the battery I could measure the actual flow rate and possibly back wash the coolant channels if they can't otherwise be serviced. Hell, if I can measure actual flow rate through the loop I'll be able to infer a lot more about what's happening. The pump and filter don't feel particularly cold - if not for that being the case before and after the filter swap if think it was the cause, but that's specifically why I had them change it.

@triangles - based on what you know of those coolant channels - would you expect there to be any issues if the pump were run in reverse? I'm considering a backwash


triangles wrote: ↑
Sat Feb 27, 2021 5:54 pm
Sounds like you may have a dead pump or clogged coolant filter. the battery cooling passages are practically foil thin metal plates sandwiched between the cells in the pack. taking apart the pack would accomplish nothing.

The battery loop also goes thru the charger. there are any number of hoses you could undo to very coolant flow but that would make one hell of a mess.

Not sure I have anything new to offer, but a few years back, my HV batter failed and I got a replacement. The dealer forgot to put in coolant. If I recall correctly, this was around August in So California. I ran like this for about a day without knowing, so no issue with the battery getting hot. The only issue I had was when charging. With my OBDII scan tool, I saw the charger temp get up to 150C and then it would throttle the charge rate and then fail to charge.

Although it took me longer than I care to admit to see there was no coolant, I made a few observations. 1) as mentioned earlier, the coolant pump would run while charging and make a louder sound....not completely obvious, but made me think, is it suppose to make that noise. And at one point, I thought the pump might be bad.

Once I discovered the lack of coolant, I added the orange coolant, but it took awhile to purge the air. Observation 2) there are 3 coolant loops and 2 of them have a "vent" line to the coolant reservoir. When the system is running properly, you should see coolant weeping through those lines and into the reservoir. If you don't see that when trying to change, then for sure, you have a blockage somewhere. Observation 3) try squeezing some of the coolant lines, there is a difference in the feel of a line filled with fluid and one that is empty. I believe that when I was trying to purge the air and I'd squeeze the hoses, I'd hear some gurgling from somewhere...the sound of air and liquid together. So you should hear any of that. I believe these coolant lines are the ones on the driver's side.

Eventually I took it back to the dealer and had them purge the air. There is no out-gas line from the cabin heater loop the coolant reservoir, so there is no way to get the air out when the loop operates independently.

At this point it has been emptied and filled a half dozen times trying to fix this. I could understand missing a burp once but having talked to the tech directly I can't imagine that would be missed every time. There's otherwise no indications of any voids - it's as if the coolant can not flow through the battery/charger loop at all. I'd think the pump impeller was bad or the filter was clogged if both had not already been fixed. 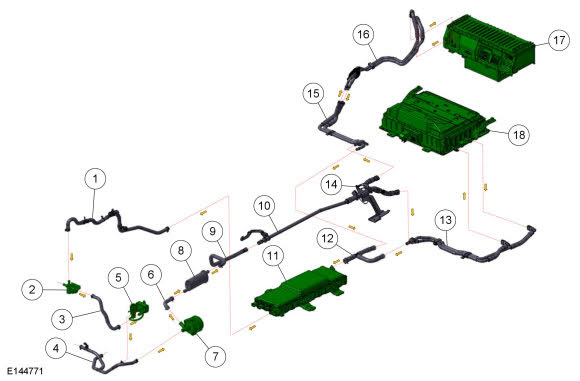 Now that I think about it though, the fact that there are separate paths through the upper and lower packs would practically rule out an obstruction in the battery itself. It would have to be somewhere before #14 and after #12 on that diagram, unless it's somehow clogged in both paths through the pack.

So I suppose my coolant channel question is moot unless I rule out all the other portions of the coolant path. At least that makes the search a lot easier.
2012 Candy Blue FFE
33.5kWh battery pack
CHAdeMO DC Fast Charging

I'm no expert, but I don't see any reason why a back flush would be bad. AFAIK it's just a bunch of very thin cooling plates sandwiched between cells.
2014 Blue Candy FFE
http://www.fuelly.com/car/ford/focus/2014/triangles/303811 (since this forum doesn't allow BBcode in sigs)

When the battery loop is running (i.e. the pump), do you see fluid drizzling into the reservoir? At least that would indicate that the pump is working. You mentioned before about putting in a flow meter...but this would be a quick check to see that something is happening.

At this point it's been up on blocks for a few months, but I could feel and hear the pump running.