I'm fairly familiar with electric cars as I've been driving electric since the 2011 leaf, then got a 2014 Focus electric, and now the 2017 Focus electric. So I get how running the heat kills range. But in my past experience running the air conditioner has never really affected range all that much. Like barely a blip. To the point I would idle sometimes in a parking lot and run the A/C knowing it's barely hitting the battery.

But about 3? or so months ago the gauges on my focus steering display are saying something very different. In the morning if I hit the A/C (setting the temperature to 67deg or something; always less than outside so I know I'm not trying to heat) I'll immediately see a -15/-20 display on the battery range. This coincides with the "climate" bar being shaded in about halfway; thus confirming climate control is draining the battery. The very second I click the A/C button to turn it off (thus just using the car fan to simply blow air) the gauges go back to no climate usage and the -15/-20 goes to a 0.

I've done this experiment numerous times so I'm certain it's not a one off occurrence or anything. But what catches me off guard is I never remember this happening before in this car. Or for that matter in the 2014 focus or the 2011 leaf. Am I crazy and I just never noticed this before or was there some over the air update that is either telling me a truth I never knew or is incorrectly telling me wrong information? Incidentally when it's on the air conditioning seems to be working swimmingly.

Confused and sweating in Southern California...

My guess is that some module in your car battery is bad, and so the whole pack can't handle the draw. You should ask a Ford dealership to run a Vehicle Health Report and see what comes out.

My car does this. The initial power drain to fire up the air conditioning compressor and pressurize the system is high, then shortly goes down to a very low number as the compressor only cycles on and off to maintain pressure. My GOM reading has wild fluctuations when cabin temperature control is turned on or off at any setting, but it levels out once I start driving.

Note that A/C temp settings have to be significantly under outside air temperature to keep from having the heater kick on in AUTO mode. In the Florida summer, I've seen the heater kick on (climate usage go to 5+) when I changed the interior temperature target from 70 to 71 degrees. Definitely wish there was an override switch for the heat like there is for the air.

Being in Arizona I run the AC pretty frequently and 15 to 20 miles drop turning it on isn't far off what what I've seen.

Full scale on the climate bar is 5kW, so halfway is around 2.5kW. If you have a 2017, your usable energy is probably down around 24kWh by now.

Ballpark energy use for driving at 40MPH is like 250Wh/mi which works out to around 10kW draw.

I know it's not continuously drawing 2.5kW for the AC, but that load ends up being about 20% of the total draw and will drop the range estimate accordingly. Especially if the guess-o-meter range is based on better than average driving efficiency - the lower the estimated watt-hours per mile the greater proportion the AC load will represent.

The view that shows your AC power should also have your range and instantaneous watt-hours/mile reading. While you don't have a nav destination set, the "range cup" around the range gauge should show you the watt-hour value it's using to estimate that range, so you can sanity check it if you like.

If that doesn't seem to add up, take a pic of the range/wh/climate view for us.
2012 Candy Blue FFE
33.5kWh battery pack
CHAdeMO DC Fast Charging

I had a similar problem, but with the air conditioner at home. I think they have similar working systems, so I think that it will also work for you. The air is cooling with the help of the freon in the cooling system, so I was adding too often freon into the air conditioner, so I decide to use the services of a master from airconservicing.org . They found out that my air conditioning system has a hole in it, and the freon was getting out through that hole. They repaired it, and the problem disappeared. Maybe you have the same problem.
Last edited by albertvadas on Sat Sep 04, 2021 7:22 am, edited 1 time in total.

In city driving in the summer in Phoenix I've seen the range jump by over 50 miles when turning the A/C off. 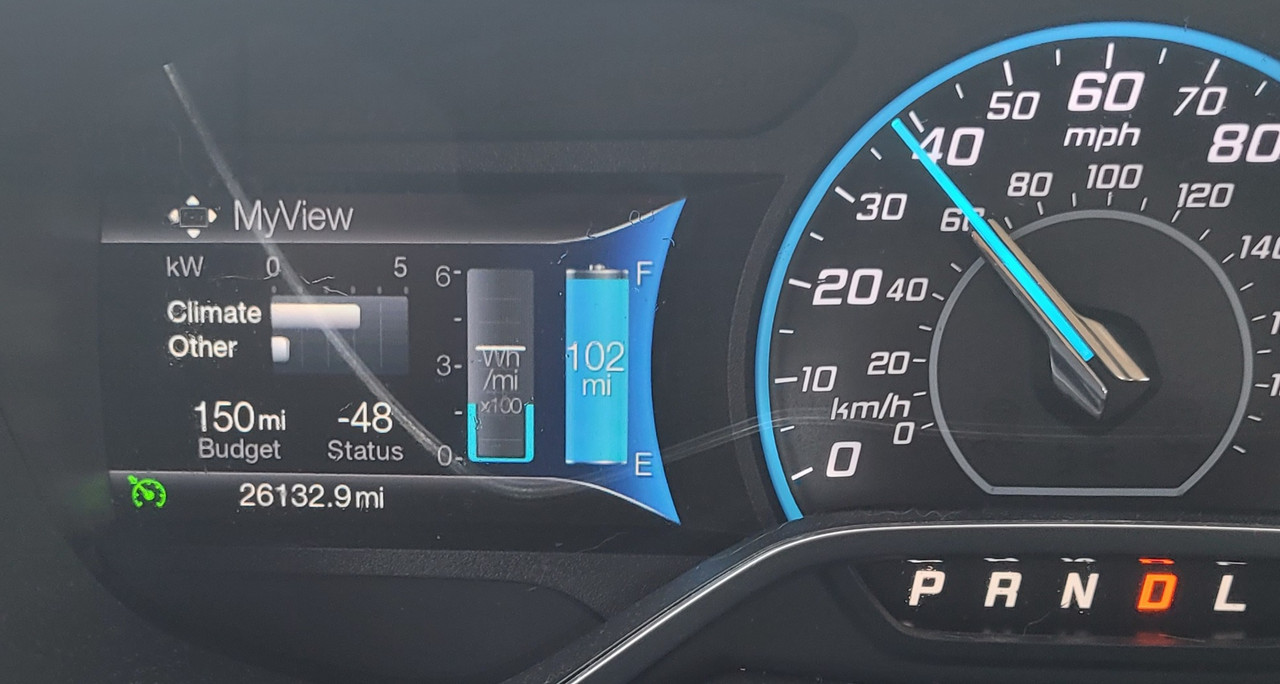 Dark window tint, and garage or shade. I've noticed that the AC power use decreases as the interior cools off. The last time I idled with AC on, it used 8 miles of range in the first 30 - 60 minutes, then only power consumption dropped drastically.

Yeah, the hot and humid weather really sucks the power from the battery.
Post Reply
11 posts