Earlier this year, Ford’s CEO Alan Mulally took the stage and delivered the keynote at the Consumer Electronics Show in Las Vegas. His address started by introducing the Ford Focus Electric, and ended by saying Ford is no longer just a car company, it’s also a technology company.

Ford’s Sync system was first introduced in the 2008 Ford Focus – the Focus has always been the test mule of Ford, and now it’s the test mule again when the 2012 Ford Focus Electric goes on sale later this year.

According to Jim Buczkowski, director of electronics and electrical systems research at Ford, in car technology is part of Ford’s built-in, brought-in and beamed-in strategy. This includes the technology built into the Ford Focus Electric, the devices the driver brings into the vehicle, and the services you can beam in. 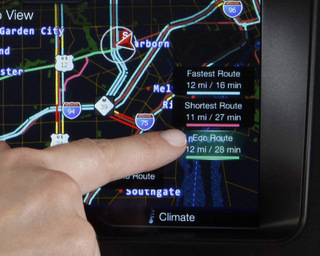 As with any first release, Ford Sync had some hiccups, and some complaints – the most common being the limited voice recognition features that required some driver education. Ford has since increased the number of voice commands to 10,000!

Today, Sync is built into 80 percent of Ford vehicles sold, and this will definitely include the Ford Focus Electric when it’s ready for market. Ford says non-Ford owners are 3 times more likely to buy a Ford after seeing a Ford Sync demonstration.

85 percent of Sync users call the system easy to use, and 65 percent say they are completely satisfied with it.

What do you think? Would you pay more to get Ford Sync in your 2012 Ford Focus Electric? Have you used Sync? Should it come standard in the Ford Focus Electric since an electric vehicle has lots more information to relay to the driver?