I've been going slow with setting up Sefs' CHAdeMO hardware on my Focus. I pulled apart the electronics and diagrammed everything up for reference as I went.

I started with this: 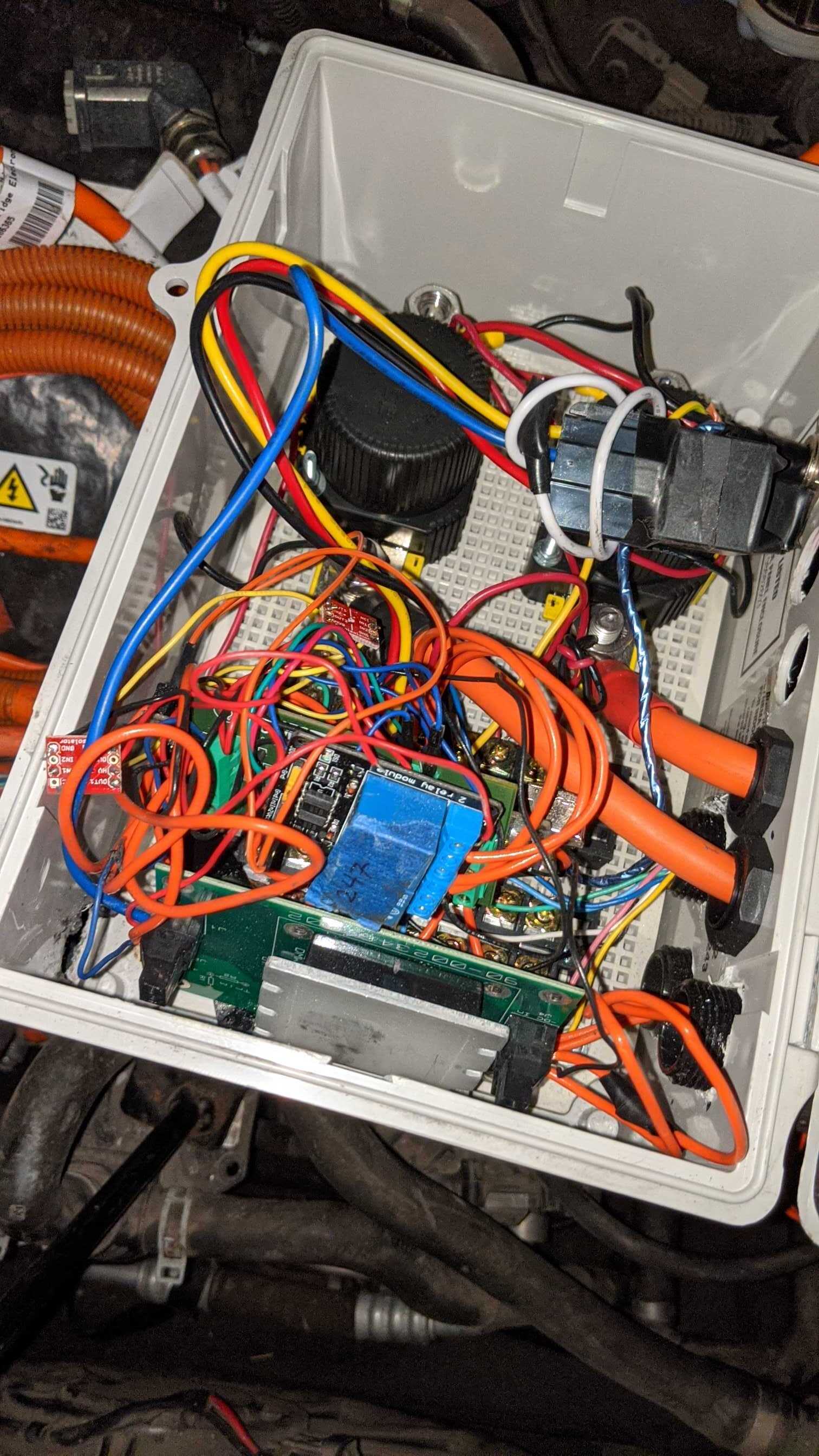 And got to this: 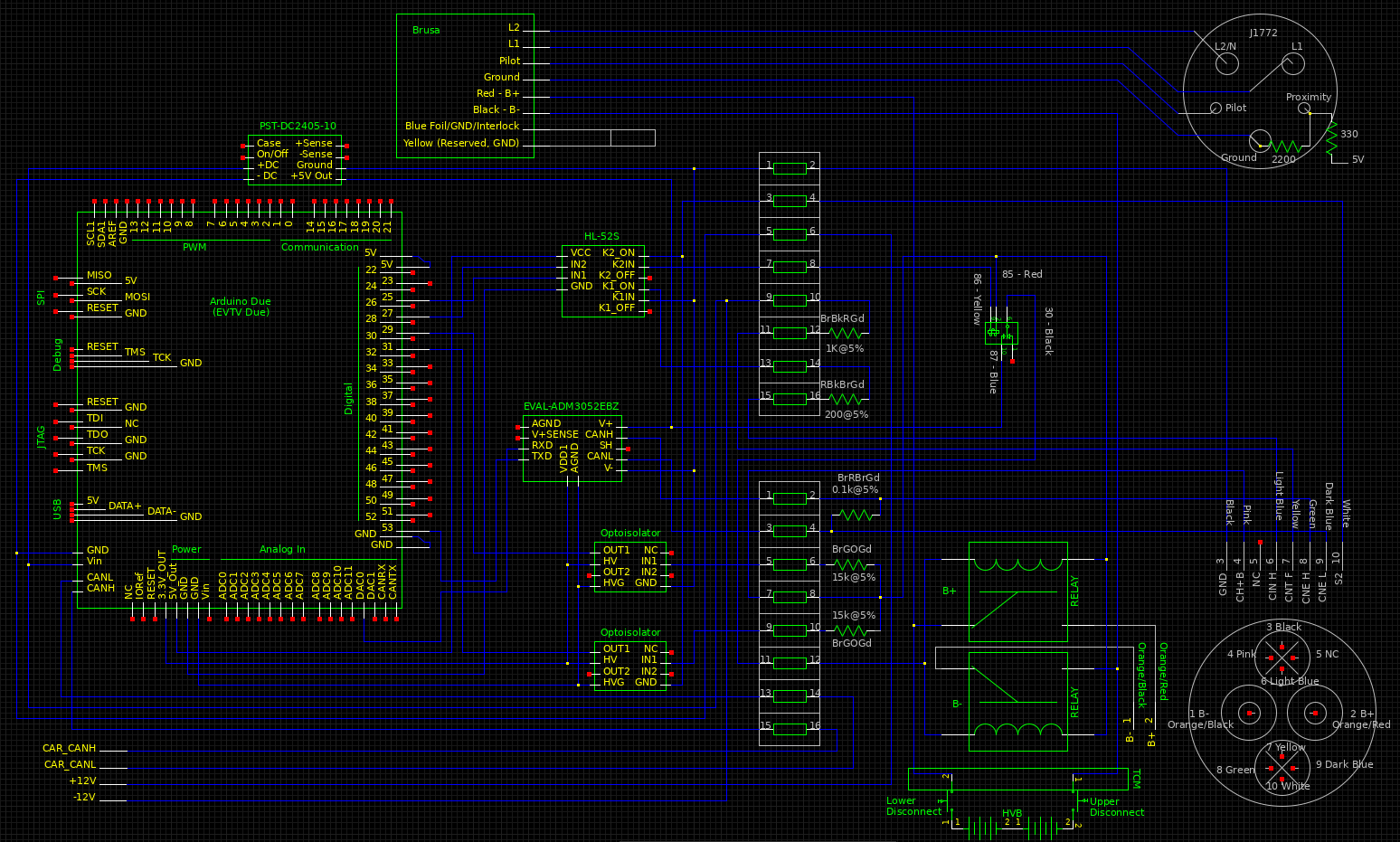 I then re-wired everything in a bit more permanent manner 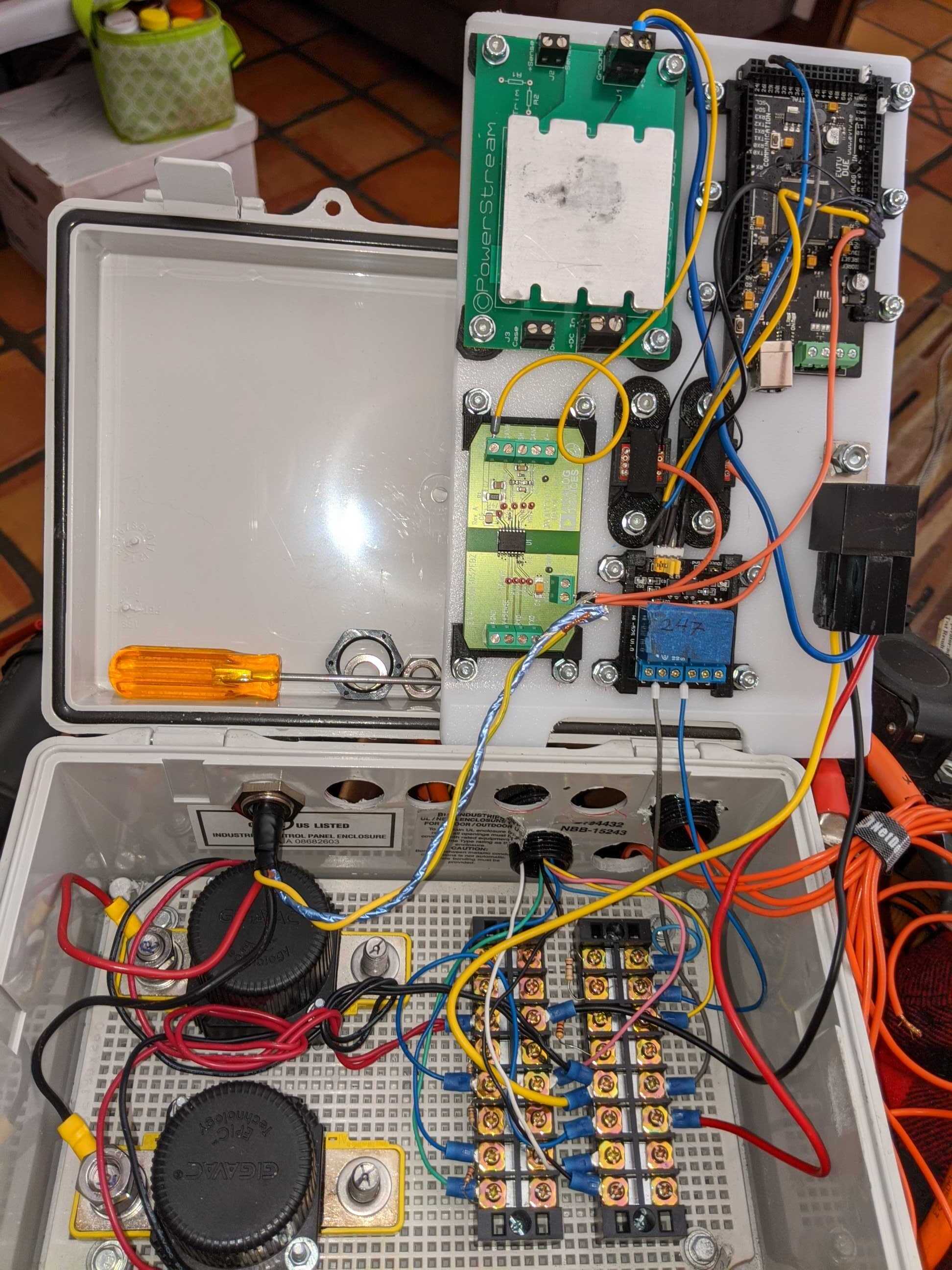 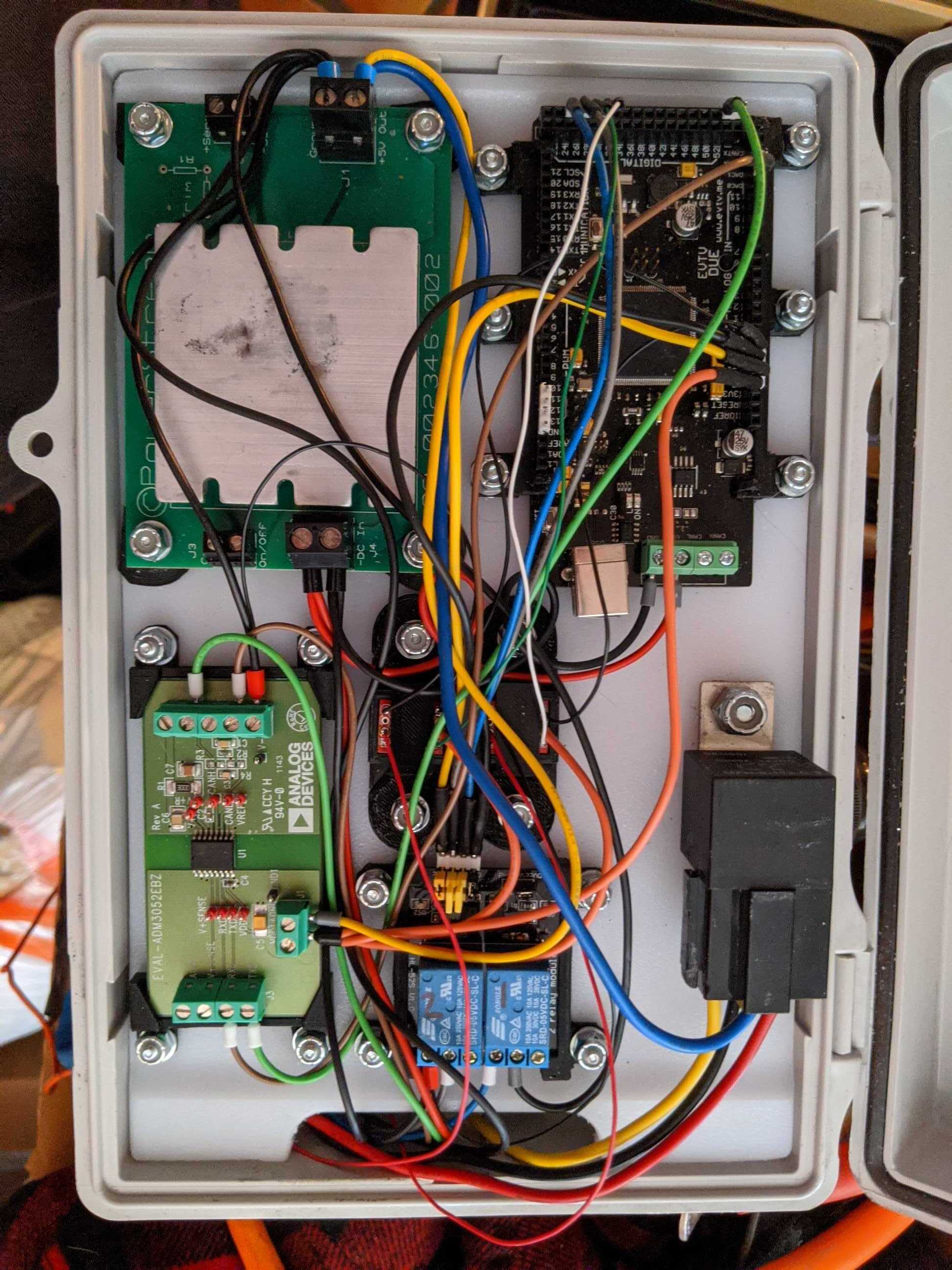 And installed it under the hood 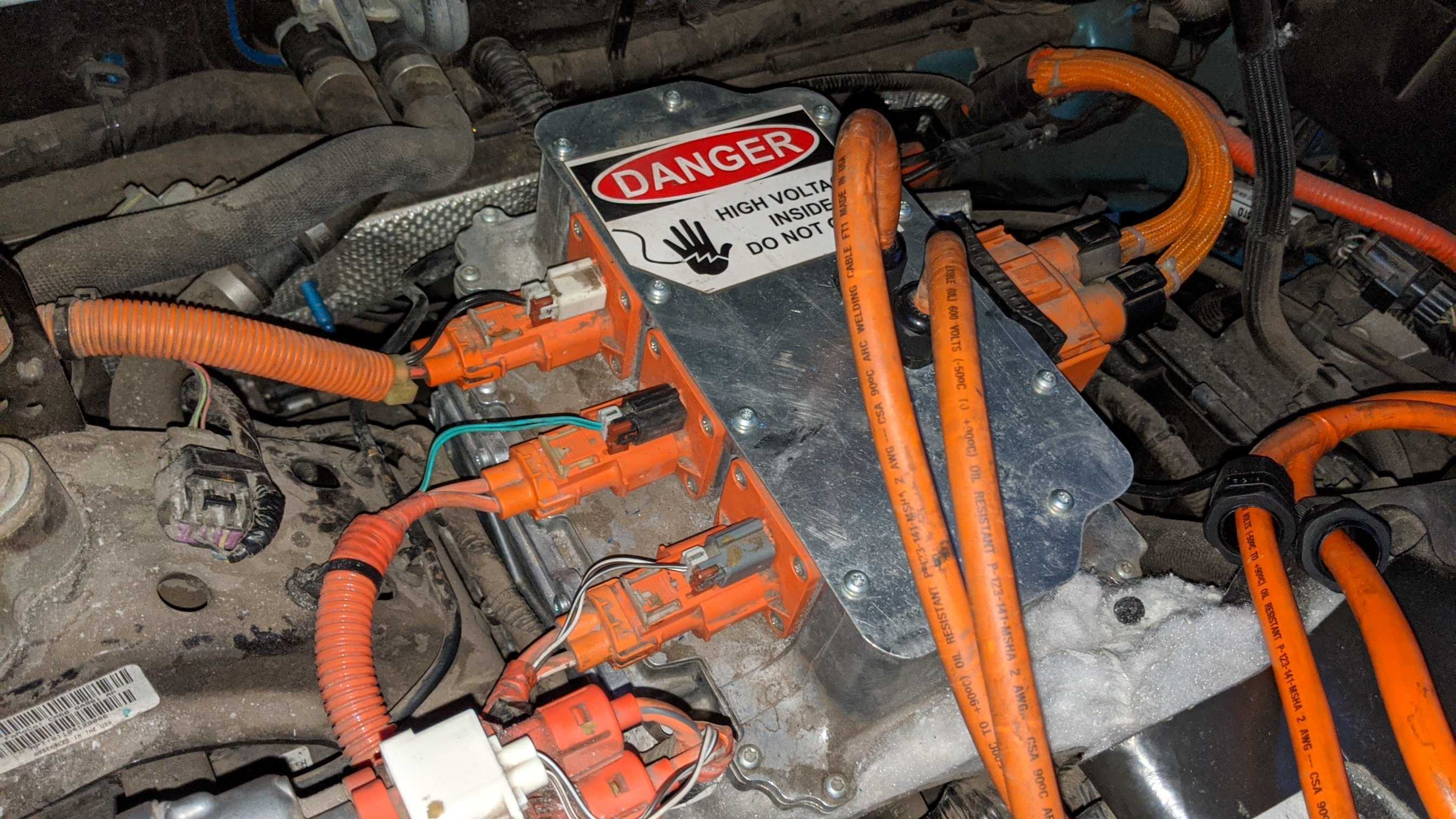 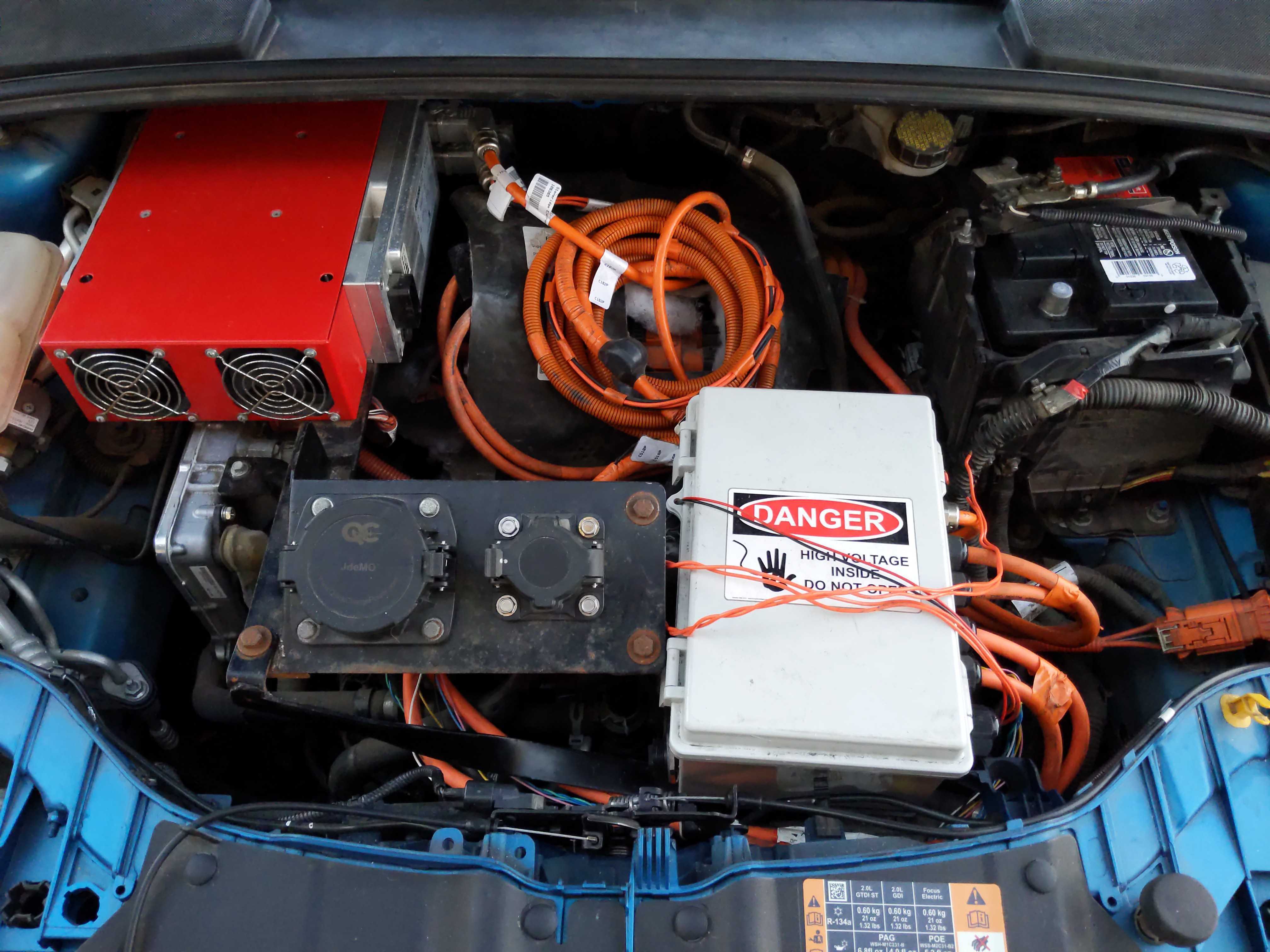 At this point, everything but the car side CAN Bus and 12V DC connections have been made. I reconnected the HVDC battery and 12V and the car came back on without any errors or warnings. I should have it ready to test by the end of this weekend. Figure I'll take it to the office and try it on the ChargePoint Express 250 we have there.
2012 Candy Blue FFE
33.5kWh battery pack
CHAdeMO DC Fast Charging 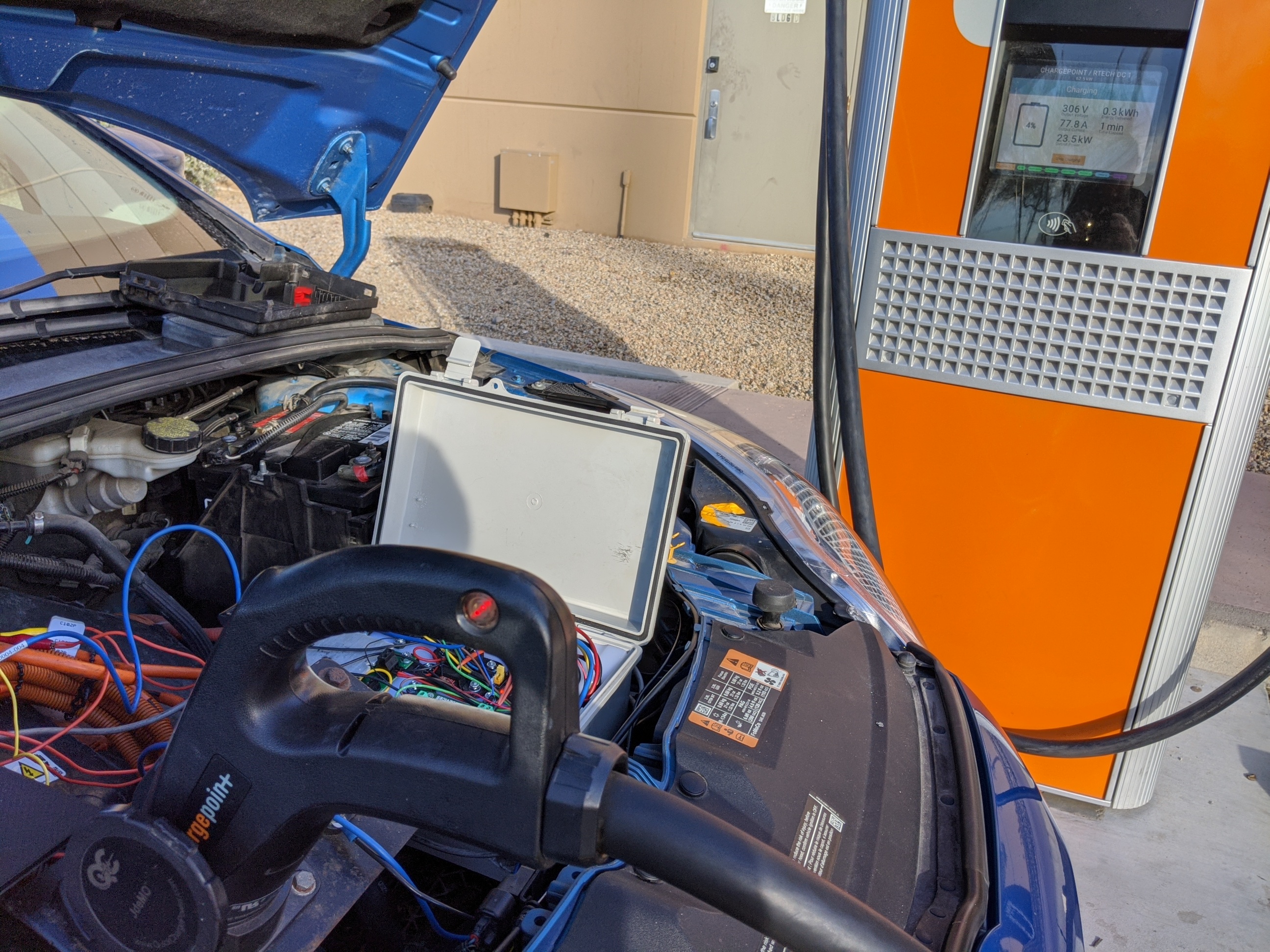 Does the charging status on the charger screen accurately reflect the true charging status?
I ask because it looks like the screen is showing 2% battery capacity. Is that right? Or are my eyes failing me again?

I ran it down and went there with a very low battery so 2% is probably right. At this point I barely look at the GOM - I have a scan gauge that shows me real time data on battery SoC and energy-to-empty. It did seem that the values reporting to the station were not correct as it went along, but the control program was written for a Focus with the smaller battery. Some of the math and bit conversions for what the car reports are really weird, so I would not at all be surprised if reporting the larger battery values requires a different encoding method.

Along the same lines, I need to try and figure out if there have been any changes in the SOBDM that relate to that larger battery. When Sefs built the stack of chargers he made sure to have them setup with the same FW version as his onboard charger, which would ensure that their behavior would match the normal on-board charger. There are temperature related de-rating factors, voltage thresholds, etc that may not be quite the same for this battery. It's just an unknown at this point.

I've been reading through the code and writing verbose comments on what is being done. It seems like it should be possible to extend the car side function to work with multiple vehicles so long as their specific data points can be defined. Essentially making "profiles" for different models. To that end, I am actually looking at the possibility of consolidating all those various boards into a single shield that could mount on top of the Arduino Due that is running this right now.

All the signals need to be well isolated electrically or the DC charger will refuse to operate. All the car side stuff is separated from the charger signals by way of optoisolators and similar components. The large board in the top left of the photo is an isolated power supply. I need to figure out just how much load is on it and see if a smaller board level component can do the job while providing enough impedance to ground. If that is possible, I should be able to layout a shield sized board that would just need to have the signal wires from the CHAdeMO port connected along with the control lines that trigger the contactors. You'd have 12V/Ground going into the Due along with the car side CAN connections and that would be it.

Nice to see this getting more use after sefs moved on the the model 3. I got to see his setup years ago after he had recently sorted this all out and had his "super charger" in his garage.

I wish I had the references and knowledge of how the car's systems work in order to be able to figure out how to shoehorn a CSS plug under the hood and not spend a fortune doing it.
2014 Blue Candy FFE
http://www.fuelly.com/car/ford/focus/2014/triangles/303811 (since this forum doesn't allow BBcode in sigs)

I'm actually working on CCS as well. I've gotten a copy of the ISO 15118 Manual and I'm starting to read through it. His hardware had the J1772 port for the Brusa, I could swap that our for the CCS/J1772 and route the DC bus wires into another set of contactors (so using one DC port doesn't expose HVDC on the pins of the other)

It will need additional/different processing hardware than what it there now - A 12V compatible PLC, a device that can process IPv6 network traffic, manage an SSL connection and process/parse EXI (binary encoded XML). After that I have to work on the actual implementation - which I hear is a nightmare. But I'm just trying to get the most basic plug and charge behavior, so I'm hopeful.

Good to hear. Keep us posted.

While the capability to DCFC would be nice, there are essentially 0 useful CHAdeMO or CSS chargers within the piddly range of my '14 FFE. CSS has been stewing in the back of my mind thinking about a future when CSS chargers are prevalent around here and If/when it becomes economically viable to retrofit a higher capacity battery where I could use CSS to actually travel intercity.
2014 Blue Candy FFE
http://www.fuelly.com/car/ford/focus/2014/triangles/303811 (since this forum doesn't allow BBcode in sigs)
Post Reply
7 posts • Page 1 of 1