Through a series of extremely lucky events, I have taken possession of the CHAdeMO mod and charger built by Sefs. The charger had to be partially disassembled for it's trip to Arizona and suffered a little (repairable) damage in transit, but it will be brought back online while I work on getting the port and secondary charger installed on my car. It's in and out of the shop, so that may take a while.

I know there was a lot of interest in this and I do hope to pick apart the implementation to document it for the benefit of others. I'm already working on some parts lists. I have some related projects that dovetail nicely with this hardware.

One thought is to physically condense the layout and get it into a "portable" form factor, in the hopes of being able to fast charge in places where sufficient power is available. My thought is RV parks (assuming you can sell them on connecting to multiple plugs for an hour). It is also fairly simple to operate this at varying capacities, so a 150A supply isn't always required.

I had also been considering a pusher trailer built from a motorcycle I have available - but with the onboard chargers in this system it would be possible to operate them at a reduced capacity from a trailer generator instead of trying to mechanically assist. 20kW would be enough to break even up to around 65mph and would only need about 60% of what my motorcycle engine can do. Of course that all depends on being able to tap into the battery bus in a usable manner while the vehicle is on and moving - but I'm going to try.

If everything worked out, it would be possible to still operate it from mains in this configuration, so it would essentially be a 30kW CHAdeMO charger on a trailer with a large backup generator. CHAdeMO also opens up the possibility for Vehicle to grid applications.

I'll keep folks posted on what happens but, much like for Sefs, this is a side project that may get visited infrequently.
2012 Candy Blue FFE with a 33.5kWh battery pack
*Coming Soon: CHAdeMO*

Re: The Focus CHAdeMO mod returns! 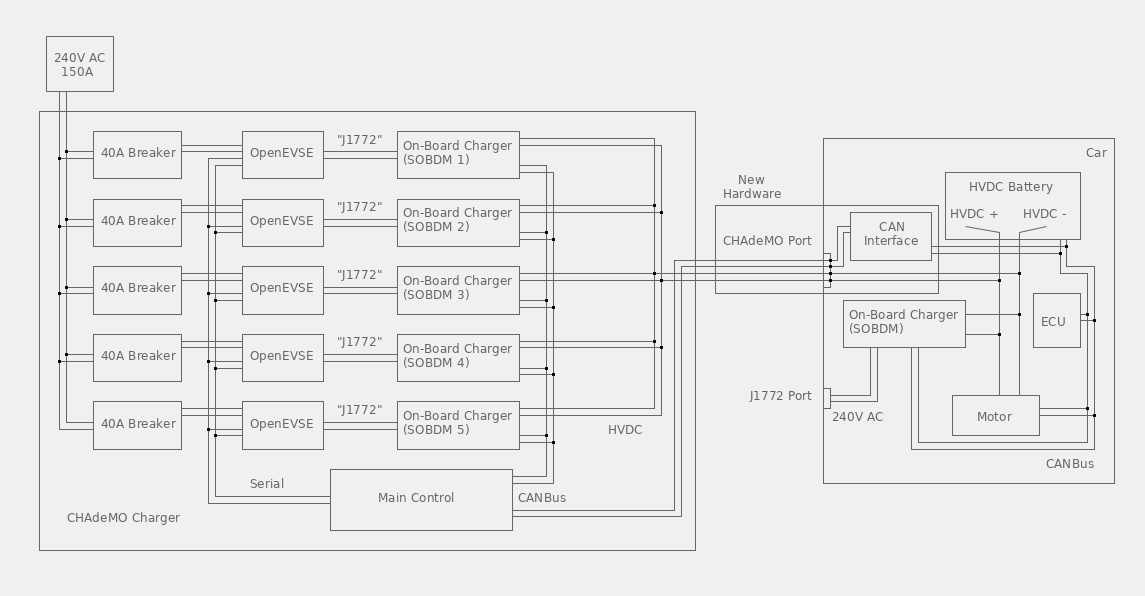