az erik wrote:You're right it's a AC motor. Those actually do provide 100% torque at full speed. They deliver 100%+ from break torque and pull up torque, which makes the "100% torque" true. Which is better than 300% torque off the line.

Reason I got all wrapped up in DC is the EMW and a few others conversion kits I've been looking at use DC/DC. Makes me wonder just how much AC voltage is coming out of this battery. I thought I saw the battery at 480 volts or so.

The diagram you give is for a fixed frequency induction AC motor. The inverter puts out a variable frequency, so is rather different. There are two areas of interest: Torque limited, when the inverter is outputting the maximum design current, and power limited. This diagram is for a Tesla Roadster, but should be fairly similar in shape (but the peak torque and power are different, of course: 92 kW (125 PS; 123 bhp) and 181 lb·ft (245 N·m) of torque.[):

jmueller065 wrote: It is an electric motor--there is no torque curve.

Actually yes there is a torque curve. There has to be or "power" could not increase.

If this motor only had 1 RPM what you're saying would be true. But it's a variable speed, thus variable torque motor. Otherwise all speed and power would be handled through a CVT transmission and not a single gear transmission. It is what I would refer to as torque crap out. It's there, right off the line, all of it, but it is not a all off the torque all of the time as commonly referred to.

Here it is an example of real torque/speed curve (for Renault Zoe): 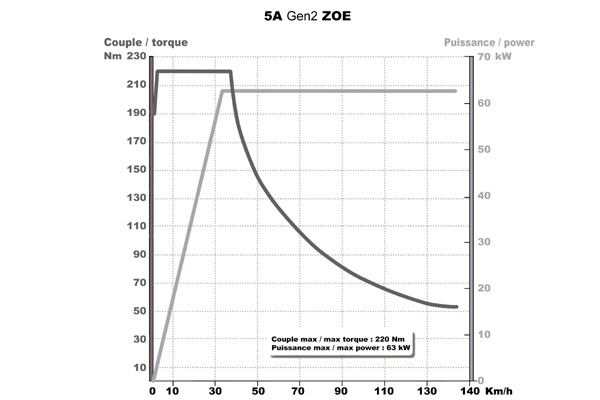 davideos wrote:I know there is a big bulky thing in the trunk that takes up a bunch of space...maybe take that out.

Not sure the organizer is going to make much of a difference...but I have thought how much better if the FFE could be if it were 18" shorter as a 2 seater coupe and some of the battery weight over the front tires.

My 2014 Smart Fortwo Electric Drive is a 2 seat coupe.
Dattery located central and low in the vehicle as per: 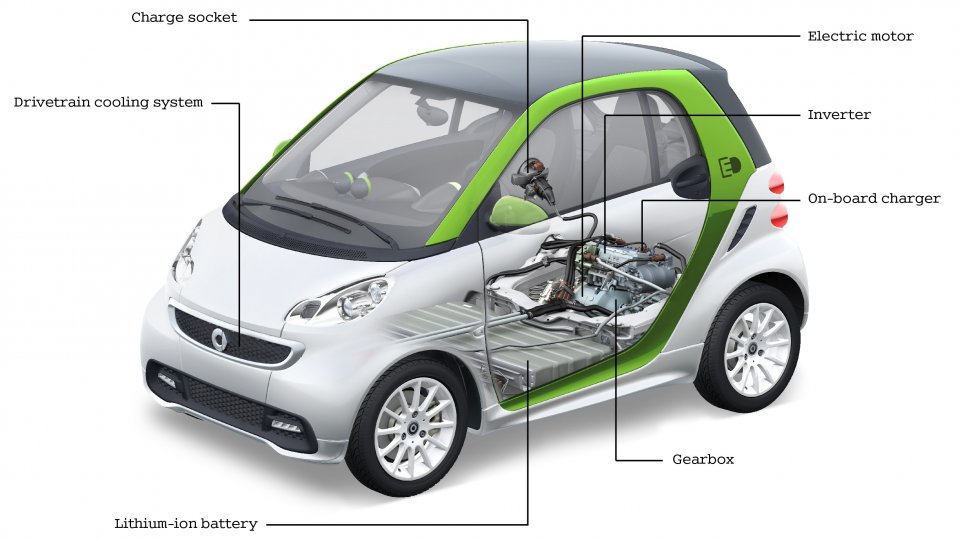 The handling is rather more harsh than my old 200x Ford Focus (which had brilliant handling for a cheap ICE commuter car) but still very good, especially in tight city streets, where having the heavy battery low in the car helps with early turn-in.

The official spec's say 0-100KPH in 11 seconds, but mine gets there in 9ish, so not sure why Smart publishes a slow time...and the 0-60KPH is just a hair over 4 seconds, which is plenty quick for the short range driving I do.

We'd all love a Telsa roadster, but for me, this little 2 seater is like driving the future today. Love it!

My brain is not doing very well with the charts JumpJack posted - I can't quite wrap my mind around what they mean in real world terms. Usually I'm good at that kind of thing - these escape me for some reason.

EVA wrote:My brain is not doing very well with the charts JumpJack posted - I can't quite wrap my mind around what they mean in real world terms. Usually I'm good at that kind of thing - these escape me for some reason.

They mean that torque in EVs is not actually "constant at any RPM", but "constant up to xx RPM", unlike ICEVs, where it is never constant but it has a peak at specific RPM.
This translates in constant acceleration (Torque --> Force --> acceleration) from 0 to xx MPH, then acceleration decreasing as 1/v from xx MPH to maximum speed.
Torque results in having an upper RPM limit because it's tied to power by P=F*v relation, so to have a constant F=P/v while v increases, Power must increase too (P=K*v)... but of course it can't increase for ever: once P reaches its maximum value (i.e. maximum allowed current in motor windings), it becomes constant, hence F=P/v =K*v/v becomes instead F=Pmax/v and it starts going as 1/v.
If you look at torque/speed chart for ICEVs at different gears, you'll see that the overall curve obtained with 5 gears is slightly equal to the single curve of an EV.

Talking about tuning.... is it possible to use OBD bluetooth devices and a smartphone also to EDIT electric car parameters besides just reading them? i.e. maximum current, minimum allowed battery SOC, and so on... But maybe this would be better named as hacking rather than tuning!

But beware of this:

This is NOT how actually EV/ICEV torque/speed curves compare!

here it is the "reality":

I also found this, but I can currently explain only first two regions of the curve, I'm still figuring out the reason of the "natural characteristic region" on the right...

I personally haven't noticed, but when I get my car back with a new battery, I'll put it to a stopwatch and find out. Should be a relatively easy experiment to conduct.

epaminondas wrote:Unless its my imagination, It is faster off of the line in L and you can generate wheel sin. It doesn't have the soft start that it does in D

You can chirp the tires in D too. You just have to be turning the steering a little bit.

I think you're imagining any difference in acceleration between D and L. L is all about regeneration, not acceleration.
2013 FFE, Platinum White, Delivered January 2013
2017 MS, Midnight Silver Metallic, Delivered February 2017
Use my referral code (http://ts.la/matt4377) to save $1000 on your next Tesla AND get free unlimited Supercharging!

epaminondas wrote:Unless its my imagination, It is faster off of the line in L and you can generate wheel sin. It doesn't have the soft start that it does in D

It's your imagination. The owners' manual says the only difference is regen braking is stronger in L.
Post Reply
50 posts