by electrons
Read some more of the huge thread "Stop Safely Now Warning" thread in this Technical Discussions section and its not real encouraging. What MermaidHair, tinilk, thanhdaica1985, etc., etc. had happen is just crazy.

Maybe Ford will "promise" that the upcoming Mustang EV will be better, and we should start trusting them. I do wonder how much the Mustang EV will benefit from the Focus (Magna) system's lessons. I think Ford is trying to bring EV engineering more in-house instead of really just buying all the big parts from Magna like ours.

I would say "don't buy Fords" because of this stuff, along with how they sca-rewed thousands of customers over the Ford Focus & Festiva automatic transmission issues for about 8 years running!! However, other car makers have spotty records too in paying for repairs and replacements when bad designs creep in to their product lines. Lots of examples from GM, Hyundai, Nissan, .... the list goes on, they all have issues they try to dodge (no pun intended, but some friends of mine with a Dodge say it really means "dodge warranty issues and responsibility").

by electrons
Service Advisor calls me every day. Today, they finally got a chance to look at it in depth (2 day delay, not bad I guess). They say its some kind of identifiable part that acts like a fuse between the battery and electronics. I might know more later on what exactly he is talking about.

He says its covered under the 8-year warranty.
No loaner car available.

He ordered the part, and they might have the car ready by Friday if we're lucky.

Nice they have people working during the Zombie Apocalypse. They only have to pause work once in a while to fight off the zombies (sorry, I just saw "Zombieland II" recently) and it's not a line item on the shop charges, I hope.... ...When I get the car back, I'll take the unusual step of wiping down the car with alcohol!

by Heima
Some electric vehicles have a pyrotechnic disconnect fuse, pyrofuse, or pyroswitch. Thats a fancy way of saying fuse with an explosive charge. The fuse is a fast acting type and might detonate/fire when the airbags are deployed or if HVIL opens under load. If that device activates, power from the HV battery is cut, and your vehicle is effectively dead in the water.

Some people might consider a contactor like a fuse, because they have finite lives and if the precharge contactor fails, you could have a weld/stuck contactor. Kind of the opposite of a fuse.

Some vehicles have E-fuses, or electronic fuses. These are circuits that replace the simple wire strand type fuses. They can respond faster, report to the computer, and reset themselves or by command of the computer.

If there is water in the battery, and upon the first short from the water (this would be fast because the water would vaporize), the computer would sense the transient change in battery voltage and supplied current, this would set a condition to shut down the vehicle as soon as it came to a stop.

by electrons
Heima, true the fuse the service advisor (Jack) spoke of might just be an effect from the real cause of an over-current, which is water ingress, since it all happened during rain.
To find out if water was indeed the underlying problem, I plan on calling Jack today to see if the technician inspected the battery for connector integrity and coolant leak evidence per TSB 20-2004 when he did diagnostics. By faulting the HV "fuse" or circuit breaker, it could be the technician is being overly lazy about fixing the real issue that caused the over-current in the first place.

I've noticed over the years that technicians and service advisors are very careful about what they do for warranty work since Ford can reject what they decide to do, and they get in trouble with everybody, including the dealership management, Ford, and the customer who gets a big bill if they do too much. So they tend to be too minimal in their approach. Dealership owners don't like warranty work that much because they get paid lower labor rates from Ford for it too.

And I might try to get them to put on the new plastic splash shield design modification and anti-corrosion spray to prevent any future water ingress, per FSA 16B02, and later included as part of TSB 20-2004.

by electrons
Got the car back. They replaced part number CM5Z-10A757-A which is the "Drive Motor Battery Pack Disconnect Switch, Disable Switch, Switch Assembly" and the car runs OK now. Guess that was it! It's a $140 part, and they would probably charge a person $500 total if warranty didn't cover it. It was covered under the 8-year battery system warranty fortunately. 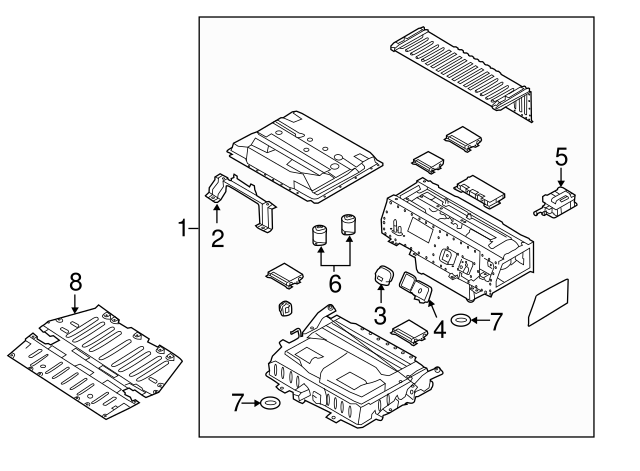 It is #3 in the image, a switch used to disconnect the High Voltage battery system. Weird it would just fail to open like that.

I got a lot of shoulder shrugs (we don't care, go away, don't ask us that, kinds of body language) from both the service advisor and the technician himself when I asked them both if they thought I should proactively do the TSB 20-2004 with it's CM5Z-9916A315-A High Voltage Lower Battery Connector Shield and spraying the big connector with Daubert Nox-Rust 7703-W (waxy, gooey sealant to keep water out). I may try to do it myself since it looks kinda easy actually, rather than paying those labor rates. ... The Ford company would prob tell me to go eff myself if I asked them, but I might try anyway to get them to pay for it like they did in FSA 16B02 a couple of years ago.

The paperwork on it says:
(PPT is Pinpoint Test, and BECM is Battery Energy Control Module computer)
"30321 Verified Concern.
Codes P0AA01, in PCM (powertrain control module computer).
Performed PPT E1 No E5 Yes Test BECM code P0A0A00 Performed PPT A1 Yes A2 Yes A5 Yes A6 Yes A7 Yes. Vehicle still won't start and has the same code. Performed PPT A again with the same results. Still won't start.
Bench-tested the CM5Z-10A757-A Disconnect Switch and it was found to be open (failed). Replaced Disconnect Switch with new one and now car starts OK. Cleared codes and retests good. Measured time for abnormal diagnostics and replacement of the switch is 2.2 hours labor."

jmueller065 wrote: ↑
Thu Mar 19, 2020 9:40 am
There is a high-voltage wiring issue with the battery near the drivers side rear-wheel. Water can get in there and cause some corrosion in the connectors.

Wow, I just took a picture of that. Awful they put the connectors so close to the tire back there! 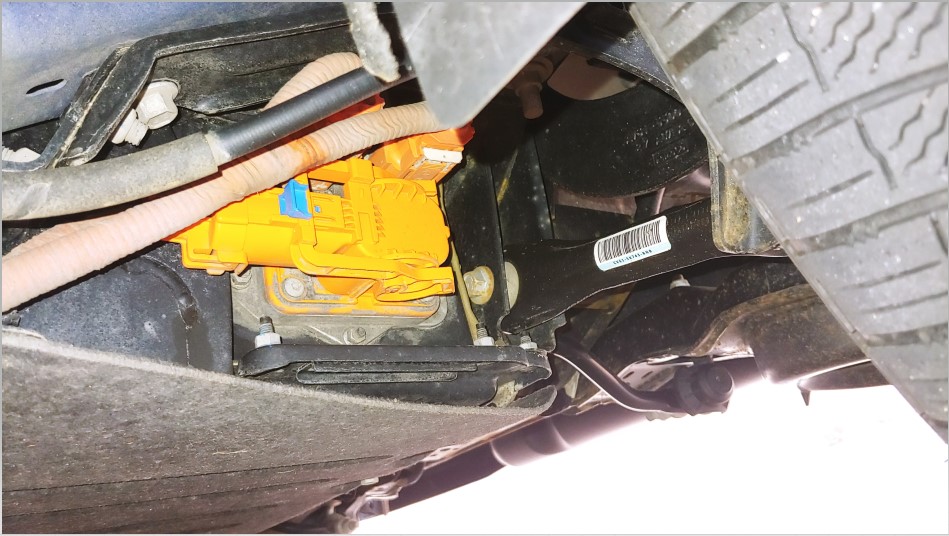 Now I see why Ford put out 16B02 and installed the complex shaped CM5Z-9916A315-A High Voltage Lower Battery Connector Shield in lucky states. ...
The high voltage connector is exposed to water, slush, gravel, rocks...... Was this designed by monkeys? A simple shield could prevent a lot of problems. At least its easy to get to to install a shield. I noticed its $123 bucks.

by Heima
That disconnect has a 350 amp fuse in it, and you blew it? Ok, fess up, you were doing burnouts, right?
When that disconnect opens you have no HV battery power. Given your situation, and the behavior of the vehicle, does that make sense?
Without the HV battery, you could not have driven anywhere. Everything was being powered off of the 12V battery.
You might want to check the health of your 12V battery because yours might have gotten deeply discharged.

Still, I hope this truly solves your problem, and you are not bothered with those nasty yellow wrenches every again.

by electrons
Heima, Did you find out there is a 350 amp fuse inside the switch from a Workshop Manual?

Per my 1st post, the yellow warning came on while driving. I continued several miles to home OK, & the car continued under full power.
(( Only the HV battery can power the main electric motor. The 12v system can't provide motive power. ))

After it was on the driveway a few seconds it would not start & had a SSN 'stop safely now' red warning.

It was raining at the time all this happened. I think water got inside the connectors while driving. Then water shifted or coalesced and fried the switch while stopped on the driveway. After drying out for days and getting a new switch/fuse, it now functions OK. Until it rains again that is.

by electrons
Given the splash shield is only around $123 or so and easy to install (TSB 20-2004 shows it is), I'll just order the dang part and complain to the dealership that they gave me a band-aid solution without helping me with the real underlying root problem: Water ingress causing amp surges.

That explains why those copper power cables have to look like they could support the Golden Gate bridge and run thick insulation too.

by Heima
I just pulled the disconnect from the back seat of my focus and took this picture: 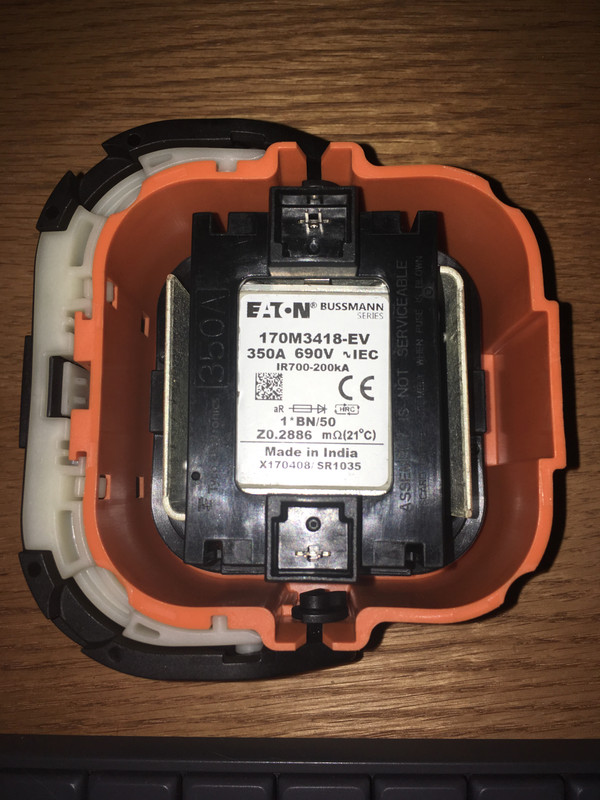 I stand corrected, they are neither. There is no resistance between them. So perhaps should the fuse blow, a circuit inside will close, and the two points become common.

You can buy the fuse core from:
https://www.aiconsol.com/170m3418-ev-bussmann.html
For $141
However, the part is embossed with the words "ASSEMBLY IS NOT SERVICEABLE"
So it probably would be fairly difficult to disassemble or is a destructive endeavor.
All times are UTC-08:00
Page 2 of 4
Powered by phpBB® Forum Software © phpBB Limited
phpbb.com