I know this isn't really one vs the other. I'm more of the mindset that any electric vehicle is good as it helps us move towards friendlier, oil-free-er cars.

Apparently Chevy dealers are really expecting a fire sale on the Volt. There's been some people asking around about Volt pricing, and some of their findings are crazy!


"Demand is going to far exceed supply for this vehicle, initially our asking price for the Volt is going to be MSRP plus $20,000, we are expecting only receive 9 Volts all of next year."

Wow!
If Ford can think ahead and have enough Focus EVs ready for release, that'd be smart.

I know they all want to play it safe and make sure they have the sales first, by why now with the Electric vehicles? They haven't really been this careful with ICE vehicles in the past...

If Ford really works fast they could steal a bunch of sales from Nissan and Chevy - the Nissan Leaf and the Chevy Volt are both in high demand, with plenty of orders already placed being promised in 9 or 10 months only!

Wow - when I heard some people were paying $5K to $10K over list price for a Chevy Volt I thought that was crazy... now there's actually dealerships saying their offering them at list plus $20k!

If the Ford Focus Electric is that popular then I'll have to wait for it! I hope Ford is smart and has thousands ready to go at launch. I agree that they could steal lots of orders from Nissan if they can get their car to market.

The truth is both of this car are really good and I can compare them even to Toyota. Chevy Volt has improved which makes it compete with Ford Focus Electric.

I think both of them will work just fine. Both of them are plug-in electric types as far as I remember. I read some the specifications of this two models from plugincars.com with these electric cars.

chrishil wrote:I think both of them will work just fine. Both of them are plug-in electric types as far as I remember. I read some specifications of this two models from plugincars.com with these electric cars.

Same thing goes here, plugincars and pluginamerica has information with regards to updates in electric cars. Reading those sites makes me become aware of the great benefits of energy efficient and eco-friendly models.

My how fast things change -- over on the Nissan Leaf forum, there was a speculation on a Chevy dealer that had 87 Volt's in stock and was looking to unload them ... may be simply some hype but obviously selling under list is the opposite direction of the first post on this thread in January:

"I thought you should know that we are actually OVERSTOCKED ON VOLTS!!! I have at least 87 to choose from as of this morning and you can benefit from our problem! ALL VOLTS ARE AVAILABLE FOR ONLY $500.00 over invoice this week only until we get the selection down to a managable level! Please call me as this deal is only available by seeing Tony Signorelli at Courtesy Chevrolet!

Very interesting. I wonder if this is true - their website lists that they have 5 Chevy Volts, but each is a unique color so perhaps they have multiple Volts in each color.

Does this mean that the media is wrong, or that they are just not reporting the fact that Chevy has caught up to the demand and now has a surplus of Volts?
I hope this doesn't mean the EV and PHEV markets are slowing? That could be disaster for the Ford Focus Electric...

My wife and I flew to NY, bought it, vacationed and then drove it home to IL. Half way back we stayed at a bed and breakfast. They pulled a 110v extension cord out of their garage and we charged up the Volt overnight.

The dealer I got mine from just sold 3 more and is selling all they make for him (and his allocations).

I used 0.17 gallons of gas today to go 57.2 miles (temp were modest). Went 48.6 miles on the battery then 8.6 miles on the gas_generator.
In my defense I had to run unexpected errands after work THEN on my way home from a sporting event there was a major detour because of road construction.
Of course everyone will point out if I was driving a 70ish mile BEV I still would have made it today.
BUT the point is I was planning on going certain distance today and a couple of unexpected things came up. Had a back up source of energy.
(FYI my MPH ranged from 30-50 thru suburbia. My highest this summer was 50 miles on the battery alone which included highway miles. Typically got 45 all summer using A/C.)

FYI this is a 2011 Volt display. On the 2012s they include kWh used. Yes, I only have 201 MPGused lifetime since I flew to NY to buy it, vacationed, then drove it home to IL.
When talking about my miles per gallon I almost always put used after it (MPGused) to clarify that is what it means. Of course, I'm using electrons from the wall for some of the miles. 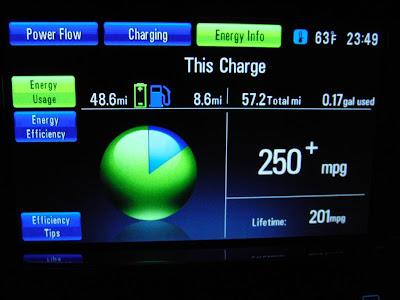 To your point - from webchat on 7Oct11: Britta Gross director of electric vehicle infrastructure and commercialization at General Motors. We're on target to deliver 10,000 units to dealers for retail sales. However, our first priority was delivering demo units to the 2,600 Chevy dealers around the U.S. before the retail units arrive. We expect to be nationwide by the end of the year: we're currently in 27 states. The product pipeline is filling up and our dealerships just now are receiving vehicles to sell. We're looking at continually growing sales from this point forward.
Post Reply
8 posts • Page 1 of 1